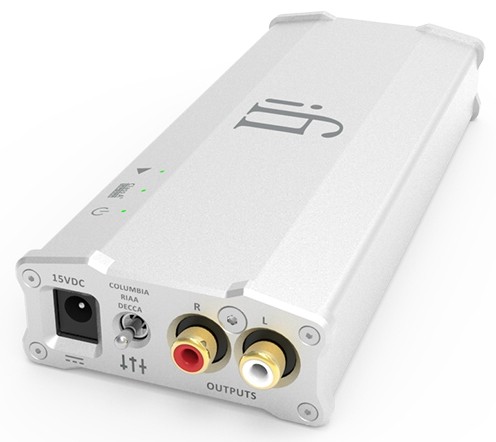 Since its launch, the original iPhono became the ‘benchmark’ phonostage under US$1,000.

In order to improve upon the sector-defining original iPhono, whilst keeping in essence the same design philosophy, our design team went back to the beginning and designed a ground-up, new iPhono2. The design, circuitry, the parts, the specifications and most important of all, the sonic performance meant the end justified the means.

The iPhono2 allows any cartridge at any price to be accommodated optimally. The maximum gain is now an astonishing 72dB to handle the lowest of low output MC cartridges. Even the legendary Ortofon MC-5000 does not require sound-degrading step-up transformers.

The original iPHONO already had a wonderful dynamic range of 90dB that had super-expensive phono stages looking nervously over their shoulder. Well, the iPHONO2 with its 106dB dynamic range has just pulled right out in front with something close to a 15dB bigger dynamic range than the best of the best phono stages.

With infamous test tracks like Tchaikovsky’s 1812 overture, the dynamism and wide-open sonic range is jaw-droppingly good and will take any audio system to a whole new level of enjoyment.

The iPhono2 is also a perfect match for older non-RIAA LPs too. The iPhono2 retains the very popular 6 different Stereo EQ curves found in the original iPhono. So one will never have to put up with sub-optimal sound quality because of being unable to select the correct EQ curve ever again.

In the iPhono2, the Class A TubeState® has been further refined. There is an all-new Burr-Brown Soundplus® J-FET type amplifier at the heart of the new Class A, J-FET/BJT output buffer.

This new circuit significantly reduces the loading seen by the main amplification circuit; which improves the circuit inherent linearity while allowing it to drive even punishing 600 ohm studio inputs with impunity.

The power supply filtering has been increased 5X in value. The iPhono2 noise performance was further optimised to achieve a noise levels that approach what is feasible at room temperature. To achieve lower noise, cooling the circuit in liquid nitrogen would be needed.

Drawing from admired AMR PH-77, the super-silent noise floor of the iPHONO2 is quite remarkable. It defies its price class to challenge money-no-object phono stages.

The litmus test of any good phono stage design is that it is able to amplify the signal but not the noise. Hence, we advise customers to take the iPHONO2 home and to not listen to it. Why? They should lower the cartridge and turn the listening level as loud as possible. Then lift the needle again……and listen for the lack of noise that just about every phono stage is affected with.

The iPHONO2 with a Signal-to-Noise ratio of 85dB is 3dB quieter than the original iPHONO.

More than ever, listening to vinyl, one can hear ‘into’ the recording itself with the blackest of backgrounds and every nuance, inflection is picked up by the system.

To guarantee an output free from DC, a ‘textbook’ high-end Phono Preamplifier# usual has up to 5 coupling capacitors from MC cartridge to output in addition to DC servos, all of which cause signal quality degradation.

The original iPhono had only 2 coupling capacitors and no DC servo. In the iPhono2, with the all-new Direct-Drive Servoless ‘DC Infinity’ circuit, it has no capacitor AND no DC-Servo; so it adds zero noise nor distortion into the audio signal path.

# The example cited is literally from a textbook on audio circuit design – “Small Signal Audio Design” by Douglas Self.

iPhono2 also uses many more Vishay MELF type thin film resistors compared to the original. The proof is in the listening. The best just got better.